Okay, let’s get straight to the disappointing spoiler alert that mCable is not worth the money. Yeah, I am sorry to tell you that, but that is the case and here is my conclusion why this is the case.

Back in July I purchased myself a Playstation VR virtual headset. I had never tried virtual reality before and I have to admit that the experience will floor you in amazement, as it is that cool. You also have to try it to believe it, as there is no way of describing it to anyone. 😮

Virtual reality is still in its infancy and all devices currently on market are pretty much first generation. There are still lots of unpolished and lacking experiences, poor graphics and many kind of problems, as the game developers are trying to find best ways to utilize this brand new technology. 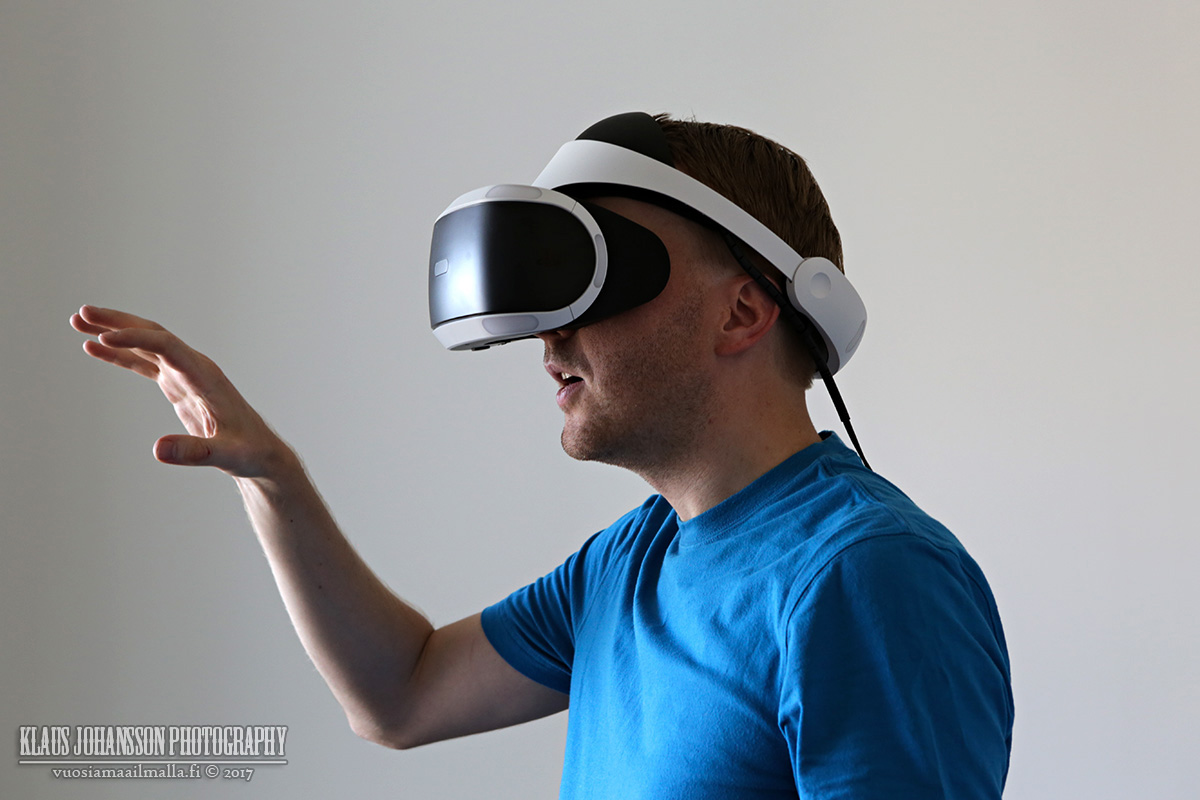 PSVR is one of the more affordable VR solutions on the market (although not cheap) and this means that Sony has had to make some compromises with their device. Playstation 4 was launched already back in 2013 which makes it unlikely that PSVR was in Sony’s first plans when the console was originally conceived. Since then Oculus Rift and later HTC Vived wowed people with the potential of virtual reality, forcing Sony follow suit with a solution that was built on top of existing hardware which was not planned for it.

One of the biggest challenges for a smooth and nauseau-free VR experience is the requirement of a steady refresh rate of 120 hertz, which requires a lot of computing power. To add to that, Sony has also chosen a solution where the picture will be rendered both on PSVR and television screen, sometimes with two different pictures. To my best knowledge the processor box between the two does assist in rendering all both views, however Playstation 4 is still left under-powered for the job. This is one of the reasons why Sony last year launched a more powerful Playstation 4 Pro which is more capable in rendering smooth framerates at a higher resolution. Game developers are still facing a challenge to optimize their games to run smoothly on two consoles, which forces them to do compromises in terms of visuals.

This really shame and in reality the difference between games on PS4 and PS4 Pro ends up being quite muted, unless you have a 4K television. PSVR headset is equipped with 1080p resolution  screen (also known as Full HD), which may sounds great, but is the lowest of the same generation devices. In order to render smooth frame rates, developers are forced to cut visuals, resulting in lower resolution textures, less overall details, shorter draw distance and less anti-aliasing (more jagged edges). As a result PSVR games look often times dull which is often times not a huge deal, as the experience itself is so immersive that you are just standing in awe.

Graphics still play an important part in a gaming experience and there are some tricks to enhance your experience. One such is using so called upconverting cables which have been on the market for long. These special HDMI cables have a chip that converts 720p resolution to 1080p and onwards to 4K. Sounds simple, but does it work? 😮

Marseille is an Silicon Valley based company and they are known for their high-end HDMI cables. Their newest product is mCable Gaming Edition which has been gaining lots of interest especially among the PSVR user base. The reason is Marseille’s promise that the advanced chip inside the cable is able to sharpen the picture, enhance colors and contrast and even adds an additional layer of ”contextual processing” (better anti-aliasing) to a game.

Despite its name, mCable is not developed to be used only with games and it works between any media source and a screen, however all its key selling points are something that virtual gamers have been longing for. It is especially intriguing when Marseille claims that their cable will do all of this without any introduced lag or drawbacks.

Behind all magic is a microchip

Such claims have been met with suspicision, as it all sounds a little too good. Unfortunately it has been hard to verify if there is any truth to these claims, as the cable came on market only in August, so there haven’t been many reviews for it. This is also the reason for my write-up – to help people make their mind about a $140 USD purchase. I know that I had troubles making up my mind about the cable, as there wasn’t any good side-by-side comparison available at the time. After carefully thinking it through, I decided to drop the money on it and placed an order which arrived in less than a week to Vancouver. 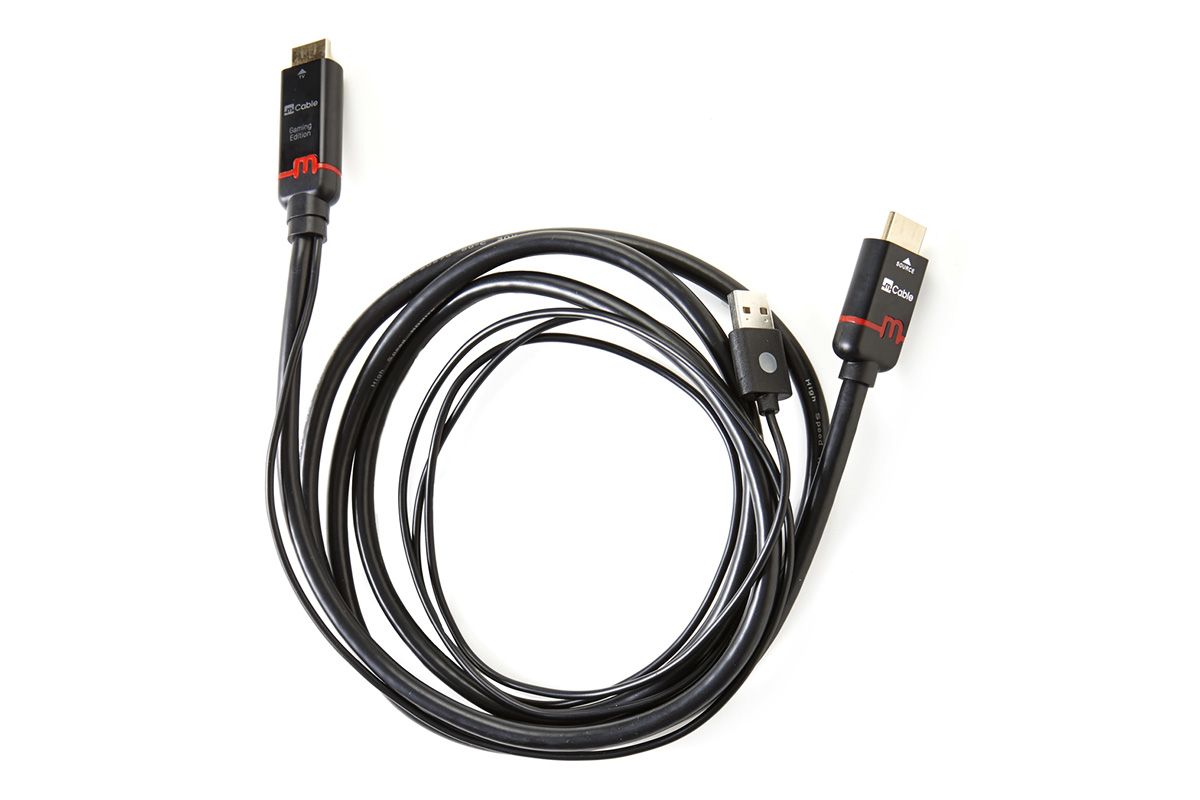 The proper way to hook up a mCable with PSVR requires placing it between the processor box and the headset’s HDMI cable. If placed between console and the processor box, the cable will not bring any benefits, based on what I read online. The correct placement will require purchasing a separate female-to-female HDMI adapter which costs less than ten bucks. It has been claimed that even the adapter can introduce lag on games, I went with the popular UGreen adapter on Amazon.

The correct way to hook up mCable with PSVR

Since there is a microchip inside the cable, it will require additional power through an USB cable. A popular solution is to attach the power cable to one of the the USB ports at the front of the console which will introduce more cable mess, but there is no avoiding it. 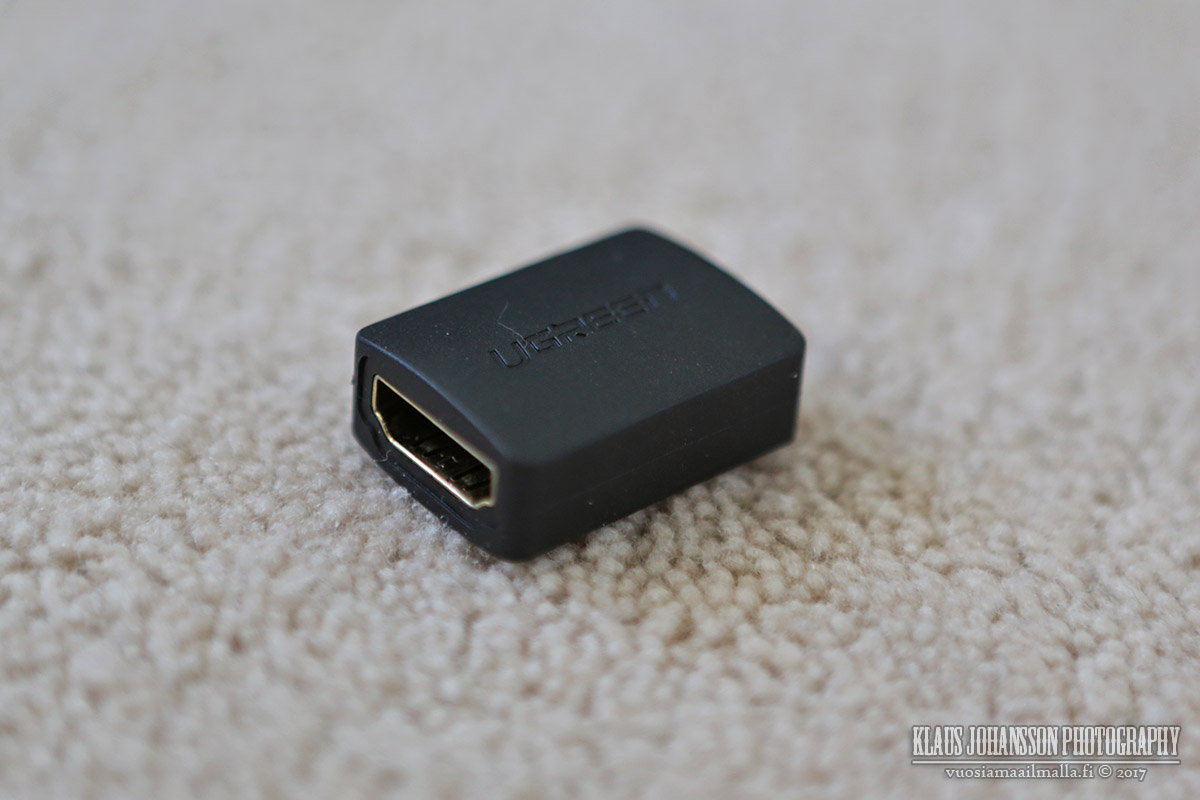 Once everything is plugged in correctly, it is time to run the first tests. Unfortunately my first impression was a deep disappointment, as the Playstation’s main menu didn’t appear any sharper to my eyes. Comparison is still hard as unplugging the cable requires resetting the headset which is frustrating and you forget how the picture previously looked like. 😕

Unfortunately reality does not match expectations

After some profound testing my impression is that the cable does next to nothing to sharpen the image. Both contrast and color seem a little bit enhanced, but the difference is negligible. What about then the biggest selling point, the advanced anti-aliasing algorithm? Well… based on extensively comparing mCable to the normal picture, there are some places where jagged edges appear a little less jagged. This is more prominent in some games than the others, but overall the difference is not mindblowing.

As I wasn’t sure if I was testing the cable correctly, I gave it to two of my friends both with regular Playstation 4 (I have a Pro). Both were excited to test the cable, however also their experience aligned with mine. There are small improvements in some places, but absolutely nothing to write home about.

With this experience I have to be honest and say that I do not recommend buying mCable Gaming Edition. Even though there are some improvements, they are way too small to justify the total price of ~$165 USD (cable, adapter, currency exchange, delivery and duties). The only good thing about the cable is that at least it does not make the picture worse or introduce any lag, which is great, but there is no easy way to justify the purchase.

I am still on the edge whether I will sell my mCable, but I hope my experience helps you in considering to spend money on it. It is so hard to know what the truth is as there are also some very positive reviews online, however I would be lying if I would recommend the purchase and my two friends feel exactly the same way.

So it looks like Playstation gamers will have to keep waiting for the second generation headsets to hit the market before enjoying better virtual reality graphics. Sony won’t release a new headset before the next console generation and Playstation 5 rumoured to come out sometime in 2019-2020. Until then PSVR itself is still an excellent purchase that should not be frowned upon, as experiencing virtual reality for the first time is something everyone serious about new technology should definitely be trying. So thumbs up for PSVR, but unfortunately thumbs down for mCable. 💡